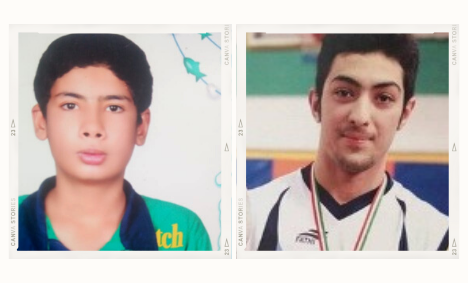 Two young men in their 20s in Iran are at risk of imminent execution for crimes that took place when they were just 17 years old. We must act now - and fast.

The trials of Hossein and Arman, were marred by serious violations, including ‘confessions’ resulting from the possible use of torture against both men.

Email the Iranian Embassy in the UK NOW calling for the immediate halt of the executions of Hossein and Arman.

The trials of Hossein and Arman, were marred by serious violations, including ‘confessions’ resulting from the possible use of torture against both men.

After his arrest, Hossein, aged 20, was denied access to a lawyer or his family and underwent interrogation for 11 days at a detention facility run by the Iranian police. His conviction last year was based on ‘confessions’ that he says were obtained during the interrogation.

His execution was scheduled for Sunday 25th July, but after a huge amount of international pressure, it was postponed a third time.

The conviction of Arman, aged 25, relies on ‘confessions’ that he says were obtained when he was held in solitary confinement for 76 days and repeatedly beaten. The Courts claimed that because the crime took place 7 years ago, it was not possible to determine Arman’s maturity at the time, and therefore assumes “full criminal responsibility”.

His execution could be carried out at any moment.

In the cases of Hossein and Arman, there are serious concerns about their trials and convictions. Their executions have both been delayed before due to mounting international pressure and outcry. There is no time to waste.

Email the Iranian Embassy in the UK NOW calling on them to help ensure the executions of both men are immediately halted.