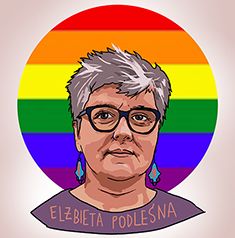 Elżbieta, Anna and Joanna could face two years in prison.

They are outspoken activists who have stood up against hate and discrimination for many years and are fighting for a just and equal Poland.

Email Poland’s Prosecutor General and demand the charges against Elżbieta, Anna and Joanna are dropped immediately.

After almost a year under investigation, Elżbieta together with two other activists, Anna and Joanna, were charged with ‘offending religious beliefs’ and could face two years in prison.

The first hearing of the trial was due to be on 4 November, but due to COVID-19 and the health of the activists their trial has been postponed to 13 January 2021.

Having, creating or distributing a poster like this should not be a crime. Everyone has a right to express themselves and their beliefs.

Elżbieta, Anna and Joanna have simply been targeted for their peaceful activism.

This is just another example of the unacceptable harassment faced by activists and human rights defenders for carrying out peaceful activism in Poland.

Since the right wing Law and Justice party came to power in 2015, human rights defenders like Elżbieta have faced escalating smears, harassment and withdrawing funding.

Elżbieta, Anna and Joanna won't stand for this harassment and will not be silenced. And neither will we.

These absurd charges must be dropped immediately. Please help by emailing the Polish Prosecutor General today.