30,000 people called on the UK to protect survivors of domestic abuse 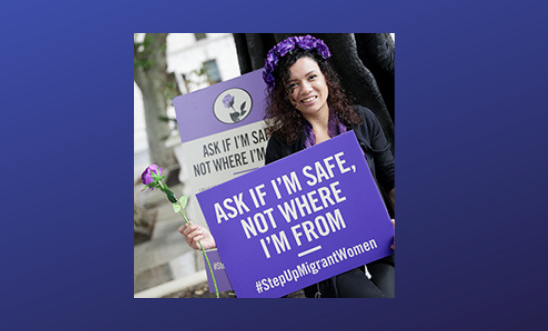 No woman should be refused help because of her immigration status.

Many thanks to the tens of thousands of you who took action calling upon Priti Patel and the UK government to give equal protection to all survivors of domestic abuse, regardless of immigration status.

The Step Up Migrant Women campaign secured support across parties for changes to the bill that remedy discrimination against migrant women so that they can report domestic abuse safely, without fear of immigration enforcement.

This is a great outcome. But the road for migrant women to be included in the bill continues to be challenging.

The government has admitted that there is an issue for migrant women who are not able to access support but insists it needs more evidence before acting. The government has put forward funds for a pilot project but this will only provide some temporary relief to some women. The change we need to ensure the human rights of migrant women are protected is through a robust law.

The fight for migrant women to live in safety and free from discrimination continues, as the Domestic Abuse bill progresses and beyond this legislative process. There is a lot of work to do and Black and minoritised and migrant ‘by and for’ specialist services are best placed to serve their communities. Bigger organisations like Amnesty International UK come in to support the organisations leading the struggle. This is why we invite you to follow LAWRS and the #StepUpMigrantWomen campaign to continue supporting this work.

This campaign was ran in partnership with Step Up Migrant Women.

The government’s proposed domestic abuse laws are not fit for purpose.

It was supposed to ‘transform our approach to domestic abuse’, but in reality it leaves some of the most marginalised women behind.

Migrant women are often already isolated in society. They can face language barriers, racial discrimination and many are on low-income jobs.

Abusers know this. They use immigration enforcement to pressure and control their partners. 92% of migrant women report being threatened with deportation by their abuser.

If they face abuse and violence from a partner or other family members migrant women struggle to get the help they need to be safe.

Isabela was left in a desperate situation because of a lack of protections for migrant women.

“I was convinced by my British ex-husband that I had a spousal visa – but he refused to apply for one as soon as I arrived to the UK.

"I continued to undergo domestic violence from my then husband who threatened me repeatedly with deportation.

"He and his mother hid my passport away from me and told me I would never be believed and that he would take our children away from me.

"I was refused support from the police and was made homeless and destitute.

"I was also told I had no custody over my child because I was undocumented.”