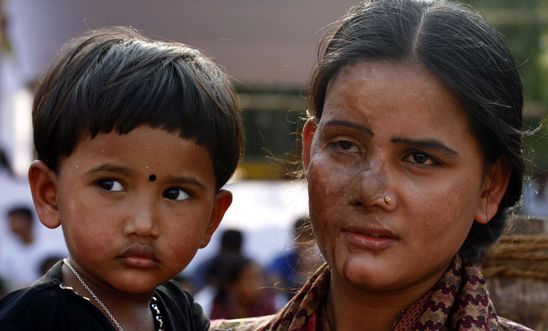 'I woke up to find a man undressing me. I tried to scream but he grabbed me by the throat so that I could not scream. My four-year-old cousin woke up and he told her to be silent. He did his business and then ran away.'
14-year old Fartun, Mogadishu

Violence against women, or gender-based violence, is a worldwide problem - and it's everyone's problem. It exists in virtually every culture on earth.

One in three women will experience violence in her lifetime. Her experience will deprive her of human rights, put her at risk of mental and physical health problems, and potentially trap her in poverty.

What do we mean by violence against women?

We follow the UN definition which describes violence against women as

'any act of gender-based violence that results in, or is likely to result in, physical, sexual or psychological harm or suffering to women, including threats of such acts, coercion or arbitrary deprivation of liberty, whether occurring in public or in private life.'
UN Declaration on the Elimination of Violence Against Women

It's a human rights issue

Violence against women is both a consequence of and a cause of inequality between men and women. As well as being a health problem of epidemic proportions, it's also a human rights problem of equal severity. Depending on the violation, it can deprive a woman of

While those rights are enshrined in the Universal Declaration of Human Rights, there are also specific pieces of international legilsation that protect a woman's right to be free from violence.

It is the state's responsibility to protect women living there from violence, even domestic abuse behind closed doors.. Authorities can do this by creating national laws that criminalise violent acts against women, providing support services like safe sheltered accommodation for women who need it, and making sure that crimes can be reported and prosecuted safely and justly. Sometimes this includes working to change public attitudes and challenging the stigma around reporting violent crime.

Domestic abuse disproportionately affects women, at the hands of men.

Although we have some statistics around domestic violence, it's difficult to know just how many women are affected by this notoriously under-reported issue. But the information we do have gives a glimpse into just how widespread this deadly issue is:

As well as the obvious human rights and health repercussions of domestic abuse, violence at home has economic implications. A woman may experience violence because she lives in poverty, but she may also experience poverty as a result of violent crimes. A study in India found that women lose around five paid work days for every incident of domestic violence.

'It is now more dangerous to be a woman than to be a soldier in conflict.'
Major General Patrick Carnmaert, former UN Peacekeeping Operation commander in DRC

Rape and sexual abuse have been used as weapons of war throughout history. The lack of stability and security leaves women and girls in particular more vulnerable than ever to violence. But for a long time it was just accepted that this was inevitable where conflict was happening, and few efforts were made to prosecute perpetrators for mass rapes and sexual violence.