Jamshid Sharmahd, a 66-year-old German-Iranian political dissident, is at risk of being convicted in a grossly unfair trial and sentenced to death. He has been arbitrarily detained in Iran for over eight months, at times in circumstances akin to enforced disappearance, without trial and access to an independent lawyer of his choosing and consular assistance. State TV broadcast his forced “confessions”, in breach of his right to a fair trial. There are fears that he is not receiving adequate health care for his serious medical conditions. 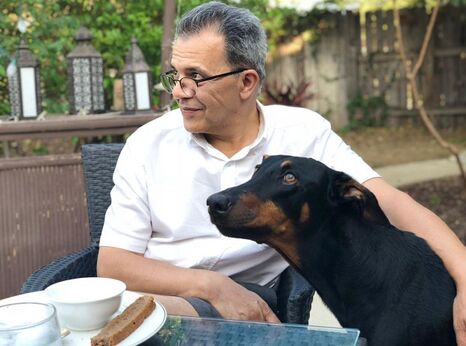 Jamshid Sharmahd, a 66-year-old German-Iranian political dissident, is at risk of being convicted in a grossly unfair trial and sentenced to death. He has been arbitrarily detained in Iran for over eight months, at times in circumstances akin to enforced disappearance, without trial and access to an independent lawyer of his choosing and consular assistance. State TV broadcast his forced “confessions”, in breach of his right to a fair trial. There are fears that he is not receiving adequate health care for his serious medical conditions.

Jamshid Sharmahd, a resident of the USA, was the spokesperson of the Kingdom Assembly of Iran (also known as Anjoman-e Padeshahi-ye Iran), an Iranian opposition group based in the USA that advocates for the overthrow of the Islamic Republic system, including through violence, and a return to a pre-Islamic Iran. He also created and managed the group’s website, Tondar, and hosted its radio and video broadcasts. The website includes statements from the Kingdom Assembly of Iran claiming responsibility for explosions inside Iran. Jamshid Sharmahd’s family has denied his involvement in the violent acts attributed to him by the authorities. Amnesty International is concerned that Jamshid Sharmahd is at risk of the death penalty as two men, Mohammad Reza Ali Zamani and Arash Rahmanipour, were executed in Iran in January 2010 after being convicted in grossly unfair trials of “enmity against God” (moharebeh) in relation to their real or perceived membership of the Kingdom Assembly of Iran.

On 1 August 2020, the ministry of intelligence announced in a statement that its secret agents, referred to as the “unknown soldiers of Imam Zaman” had arrested Jamshid Sharmahd following a “complex operation” without providing further details. The same day, Iran’s minister of intelligence, Mahmoud Alavi, stated that Jamshid Sharmahd was “heavily supported by the intelligence services of the USA and Israel” and that he had been “led” into Iran though “complex operations” and taken into the custody of the ministry of intelligence. This was widely understood to have meant that he was abducted by Iran’s intelligence agents from abroad – Jamshid Sharmahd had been in the UAE – and forcibly taken to Iran. Jamshid Sharmahd’s forced “confessions” have been aired on Iranian state television on multiple occasions while he has been held in pre-trial detention. In one propaganda video, released on January 2021, his “confessions” are interspersed with clips of his broadcasts for the Kingdom Assembly of Iran, with him identified as the group’s leader and a “terrorist”. In an episode of the Iran-produced fictional television series Safe House, which was first aired in late December 2020, Jamshid Sharmahd was mentioned as belonging to the Kingdom Assembly of Iran, conducting “secret” work and having ties to the USA and Israel; in a 14 February 2021 media interview, Mahmoud Alavi said the ministry of intelligence helped produce this television series. In a late November 2020 telephone call, Jamshid Sharmahd told his family he was being held in Tehran’s Evin prison; but in subsequent calls, he said he was no longer there, though was unable to say where he was being held. He also reported during a 23 March 2021 phone call that he had lost nearly 20kg in weight and that some of his teeth had been pulled while in detention without elaborating further.

Since 2019, Amnesty International has documented two other cases involving the abduction of dissidents based abroad by Iran’s security and intelligence agents and their forcible return to Iran. Dissident journalist Rohoullah Zam, who had been granted asylum in France, was abducted during a visit to Iraq in October 2019 by the Revolutionary Guards, apparently with the assistance of Iraqi intelligence authorities, and forcibly returned to Iran. He was executed in December 2020 following a grossly unfair trial (for more information, see https://www.amnesty.org/en/latest/news/2020/12/iran-execution-of-journa…). Another example is of Iranian-Swedish national Habib Chaab, a political dissident from Iran’s Ahwazi Arab minority, who disappeared shortly after arriving in Turkey on 9 October 2020. In late October 2020, Iranian state media announced his detention in Iran, and state media outlets broadcast his televised “confessions” of capital crimes which carry the death penalty.

While every government has a duty to bring to justice those responsible for violent criminal acts, anyone arrested or detained on a criminal charge, including those related to “terrorism”, must be treated in full compliance with Iran’s human rights obligations including rights to a fair trial. These include the rights to choose one’s own lawyer; to access effective legal assistance from the time of arrest and throughout the pre-trial and trial proceedings; to be brought promptly before a judge; to challenge the lawfulness of detention before an independent, impartial tribunal; to be presumed innocent; to remain silent and not to be compelled incriminate oneself or to confess guilt; to obtain full access to relevant evidence; to not be detained on vague charges; to examine and cross-examine witnesses; to receive a fair, public hearing before a competent, independent and impartial tribunal; and to be provided with a public, reasoned judgement. Amnesty International has documented a pattern of systematic violations of the rights to a fair trial in Iran from the time of arrest and throughout the investigation, trial and appeal proceedings. Courts routinely ignore allegations of torture and other ill-treatment, without ordering an investigation, and rely on torture-tainted “confessions” to issue convictions and sentences, including in death penalty cases.