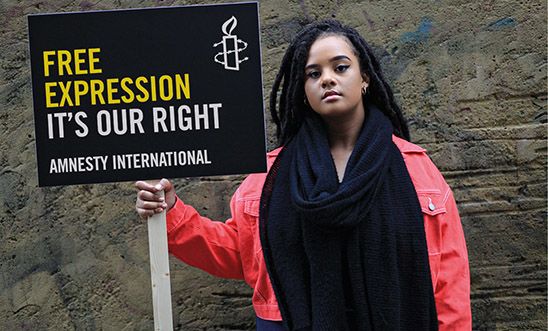 "I'm hoping to make everyone realise the potential they have to make a change. To make people realise that you can't argue with facts and that we must do it ourselves if nobody else will. I also want people of different interests to engage with topics they aren't familiar with too."
— Sophia Tassew

Art director and creative Sophia Tassew aka 'RIOTGAL' is making a huge impact on the art scene by providing space for creatives from marginalised communities and promoting the need for inter-sectional feminism. This year Sophia curated a 'RIOTGAL' event to mark International Women’s day with pieces chosen to explore diversity and commentary of the current social and political climate to champion a more inclusive female-led movement.

Female empowerment is something Sophia feels incredibly strongly about and from working in a male dominated industry was inspired to write notes of empowerment to hand out at a London underground station. The letters advised women not to apologise for talking about what they love and to “speak with a loud, clear voice’’, encouraging women to embrace all forms of their femininity.