Qatar World Cup: The ugly side of the beautiful game 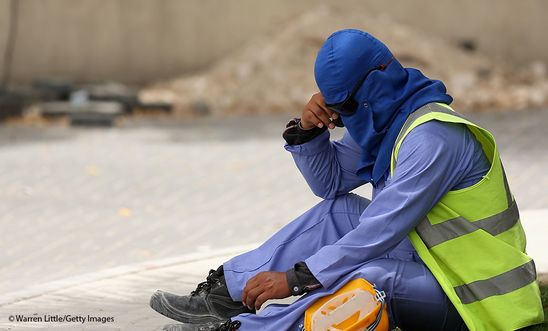 A construction worker takes a break from a building site in Doha, Qatar. © Warren Little/Getty Images

Migrants building a state-of-the-art stadium for the 2022 football World Cup in Qatar are abused and exploited – while FIFA makes huge profits.

People from Bangladesh, India and Nepal working on the refurbishment of the showcase Khalifa Stadium and landscaping the surrounding gardens and sporting facilities known as the 'Aspire Zone' are being exploited. Some are being subjected to forced labour. They can’t change jobs, they can’t leave the country and they often wait months to get paid.

Meanwhile, FIFA (football’s global governing body), its sponsors and the construction companies involved are set to make massive financial gains from the tournament. We have found eight ways that some workers building the Khalifa Stadium and the Aspire Zone are being exploited…

Many migrants seek work in Qatar to escape poverty and unemployment in countries such as Nepal, Bangladesh and India. But to get a job they have to pay high fees.

The workers we spoke to paid amounts ranging from US$500 to US$4,300 to unscrupulous recruitment agents in their home country. Many are in debt, which makes them scared to leave their jobs when they get to Qatar.

'God knows there are days I cannot continue, everything becomes too much… The only thing that keeps me alive is the thought of my children.'

Sakib, gardener from Bangladesh who took out a loan to pay US$4,000 to a recruitment agent

We saw men sleeping on bunk beds in rooms for eight or more people. But Qatari law and the Workers’ Welfare Standards allow for a maximum of four beds per room and prohibit bed sharing and the use of bunk beds.

Recruitment agents also make false promises about the salary workers will receive, and the type of job on offer. One worker was promised a salary of US$300 a month in Nepal, but this turned out to be US$190 once he started work in Qatar.

When workers tell companies that they were promised higher salaries, they are simply ignored. As Mushfiqur, a gardener in the Aspire Zone, recalled, 'My manager just said, ‘I don’t care what they said in Bangladesh. We are giving you this salary and nothing more. If you keep talking like this I’ll tell them to cancel your visa and send you back’.'

Sometimes, salaries aren’t paid for several months. This can be disastrous – workers are unable to buy food, send money to their family back home or make payments on recruitment-related loans. Many are pushed to the brink of desperation.

'My family is now homeless and two of my younger children have been taken out of school… Every day I am in tension, I cannot sleep at night. This is a torture for me.'

Prem, metal worker on Khalifa Stadium from Nepal whose salary is often delayed

5. Can’t leave the stadium or camp

Some employers don’t provide or renew residence permits, even though they are required to by Qatari law. These ID cards show that workers are allowed to live and work in Qatar. Without them, workers can be imprisoned or fined. Because of this some of the men working on Khalifa Stadium are scared of venturing beyond the work site or their workers’ camp.

All the workers we spoke to had their passports confiscated by employers. What’s more, if they want to leave Qatar they have to get an 'exit permit' approved by their company. But employers often ignore these requests or threaten workers, saying they can’t leave until their contract is up – which could be another two years.

'I remember my first day in Qatar. Almost the very first thing [an agent] working for my company did was take my passport. I haven’t seen it since.'

Shamim, a gardener at the Aspire Zone from Bangladesh

If workers complain about their conditions or seek help, they are often intimidated and threatened by their employers. As one migrant worker on Khalifa Stadium told us, 'I went to the company office, telling the manager I wanted to go home [back to my country] because always my pay is late. The manager screamed at me saying ‘keep working or you will never leave!’'

Mohammad, who maintains green spaces in the Aspire Zone said, 'The company has my passport. If my sponsorship status changes they will send me back and I have a lot of debt to pay…, I want my passport back… [and] the camp is no good, there are eight of us in one room – it is too many. But I cannot complain [because] they will end my job.'