Afghanistan: at least 50 civilians killed this week as 'slaughter' continues 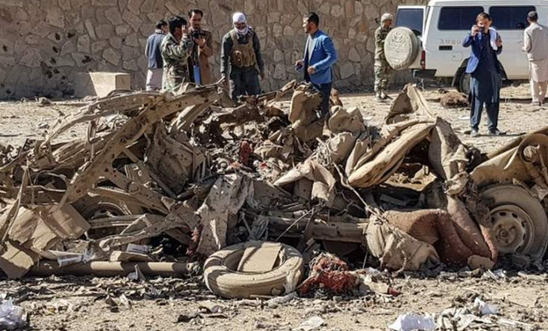 Moe than 1,200 civilians have been killed in the first half of 2020 © AFP via Getty Images

‘Afghan civilians are being slaughtered on a daily basis’ - Omar Waraich

Despite ongoing peace talks civilians continue to pay the price for the conflict in Afghanistan, said Amnesty International, following a spate of bloody attacks that have killed at least 50 people in the past week alone.

Yesterday, four people were killed and around ten injured in the Shareen Tagab district of Faryab Province, after Taliban forces fired a rocket into a market.

Later the same day, 12 children were killed and at least 18 people injured after an airstrike by the Afghan military hit a school in the province of Takhar.

These latest casualties join the 180 civilians killed and 375 wounded in the month preceding 20 October, according to figures from the Afghanistan Ministry of Interior this week.  According to the United Nations Assistance Mission in Afghanistan, during the first half of 2020, 1,282 civilians had been killed and 2,176 were injured in the conflict.

Meanwhile, intense fighting between Afghan government and Taliban forces over the past fortnight in the Helmand province capital Lashkar Gah is still ongoing, and, according to local media reports, has so far forced at least 40,000 people to flee their homes.

“The world must sit up and take notice. Afghan civilians are being slaughtered on a daily basis.

“While the parties talk peace, we’ve seen a marked escalation in violence this month, with Afghan civilians as ever paying the heaviest price.

“We urge all parties to the conflict to take all measures necessary to protect civilians and respect international humanitarian law. The international community must make the protection of civilians a core demand for their ongoing support of the peace process.”

Amnesty is calling on the Afghan and Pakistani authorities to cooperate to urgently establish a safe and efficient procedure for Afghan nationals wishing to apply for visas to travel across the border, following a stampede in Jalalabad on 21 October that killed at least 15 Afghans trying to secure medical visas to enter Pakistan.

The 15 confirmed dead, 11 women and 4 men, were part of a crowd of more than 3,000 who had gathered after the Pakistani authorities resumed issuing visas last week, following a seven-month pause caused by the COVID-19 pandemic.

“This is a heart-breaking loss of people who were simply trying to access medical care, which has become an even more precious commodity in the middle of a pandemic.

“With thousands more seeking to cross the border to receive what could be life-saving treatment, it’s vital that the Afghan and Pakistani authorities work together to quickly establish an efficient and safe visa application process.”