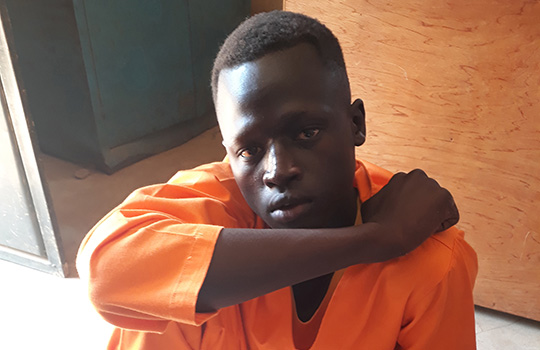 Magai Matiop Ngong was 15 when he was convicted of murder. The school student, who loves running and gospel singing, had no lawyer to help him until after the trial. Although he told the judge his age and that the killing was an accident, he was sentenced to death by hanging.

Now 17, Magai is on death row in South Sudan’s capital, Juba. He survives on the hope that his appeal against execution will succeed, enabling him to return to school. The death penalty for children who were under the age of 18 when the crime was committed is strictly prohibited by both international law and South Sudan’s Transitional Constitution.

Nevertheless, one of the seven people hanged in South Sudan last year was, like Magai, just a child.

'Before the accident, I was in secondary school… My own aim was to study and do things that can help others.’
Magai Matiop Ngong

Before posting your message to Magai, take a photo of it and post on your social networks, using the hashtag #InSolidarityWithMagai. On Twitter, use the same hashtag and tag your tweets to @AmnestyEARO, and @RepSouthSudan and/or @PresSalva.

When sharing photos, include banners or signs you’ve made with #InSolidarityWithMagai.

Tell the government to provide the residents of Matarinao, Eastern Samar, with decent living conditions.

South Sudan does not have a functioning postal system, so please send a message to President Salva Kiir Mayardit on Twitter: @RepSouthSudan and @PresSalva.