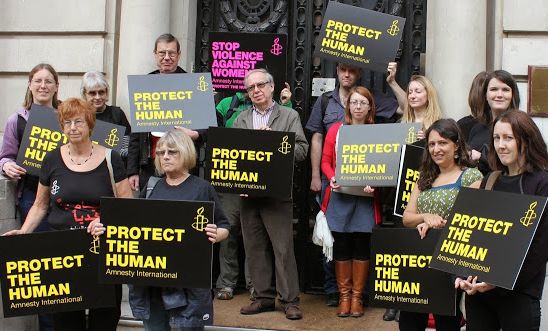 The Crawl was organised by Tudor Wright with help from Emma Seymour, Jon Leyshon, Caroline Peers, Paul Donohoe, Peter Martin and Megan Blokland, members of AI Wandsworth. Tudor gave the following statement at the start of the crawl, and outside each embassy he gave information on the prevalence of FGM in each country:

This is a demonstration against FGM (or “cutting”), organised by members of the Wandsworth Group of AIUK. As such, it is a part of AIUK’s general campaign for Women’s Human Rights and it forms this year’s annual Embassy Crawl by the Wandsworth Group (in other years we have demonstrated for other AI campaigns – against capital punishment, violence against women, and child soldiers, to name a few).

Today we are demonstrating against the barbaric practice of FGM and we will be visiting the embassies of those countries which have the largest numbers of victims, namely Nigeria, Sudan, Egypt, Indonesia, and Ethiopia; we will also be visiting the embassies of Yemen; and Senegal in order to congratulate them on doing probably more to eradicate FGM than any other affected country.

The reason for campaigning against FGM now is that there has been growing concern about the estimated 66,000 girls and women in the UK who have already suffered genital mutilation and the estimated 30,000 children who are now at risk. There has also been the Evening Standard’s admirable campaign this last year against FGM. At the same time, AIUK are currently campaigning for Women’s Human Rights and, most importantly, the United Nations in December last year passed a resolution banning the practice in all 194 member states.

FGM thrives on secrecy and ignorance. A few weeks ago I had a meeting with the religious and community leaders of the Somali community in South London. (We will not be visiting their embassy today as due to their civil war they have no effective diplomatic representation here.) Somalia has the highest prevalence of FGM among African states: 98%, and yet nearly all of the men I spoke to were uncomprehending or in denial about FGM, and I realised that because of this almost universal mutilation of Somali girls and women and of the severest kind – 95% having their genitals excised and 80% being sewn closed – they thought that this is how women naturally are, and their wives and daughters were normal and therefore had not been mutilated at all!

Hopefully today this demonstration of our revulsion towards FGM will make a small but important difference, and if the publicity we generate will save just one child from genital mutilation, it will have been worthwhile.
Earlier this week we sent a letter to all of the embassies we will be visiting today and I will read it now, and at each embassy I will give information from the UNICEF report (“Female Genital Mutilation / Cutting: A statistical overview and exploration of the dynamics of change”, UNICEF, New York, 22 July 2013, 190pp). The information on Indonesia I have taken from elsewhere.

Outside each embassy, Tudor gave information on the prevalence of FGM in that country. A documentary film-maker from “AI-Arabiya” TV channel recorded our visits to the first three embassies and interviewed Deena of the anti-FGM charity, FORWARD, for future transmission. Deena gave us more detailed information on the situation in Sudan, as did Ann Marcus (AI’s Egypt country co-ordinator) on Egypt.

If you are interested in the subject of FGM, please see the UNICEF report.

Also, please feel free to get in touch with Wandsworth Amnesty International at: wandsworthai@yahoo.co.uk