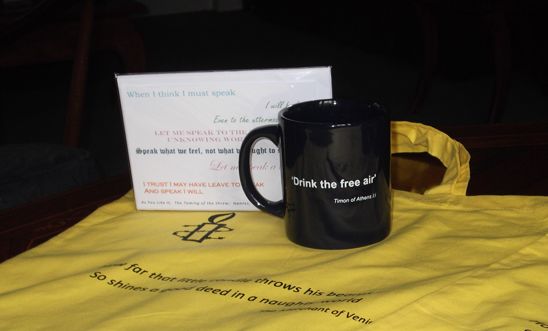 With Stratford on Avon in carnival mood this weekend (April 23rd - 24th) to celebrate the 400th anniversary of the death of William Shakespeare, local Amnesty members have responded with their own unique creative ideas under the heading 'Will for Freedom'.

The first of these has been the development of a line of special mementos including note cards, mugs and linen bags decorated with the Amnesty logo and a selection of Shakespeare's most famous quotations on the subject of human rights, such as  free speech, freedom and justice. These will be for sale to the public throughout this special year. Contact Penny at pennyf@dircon.co.uk for sales.

The second of these ideas has been the creation of an appliqued banner which depicts the Amnesty candle surrounded by contemporary images and more quotations. This striking artwork will be proudly carried by members of the local group through the streets of Stratford on Avon in the birthday parade on Saturday. If you are joining the crowds, look out for our banner and give us a big cheer!