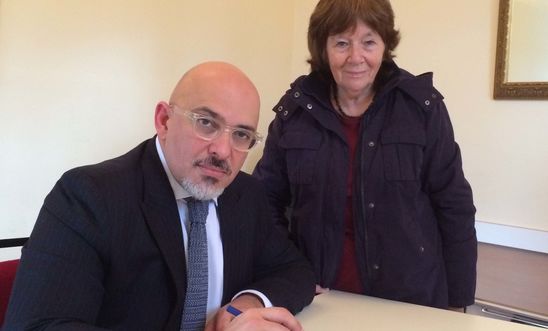 Stratford MP, Nadim Zahawi has shown his support for Amnesty International’s ‘Write for Rights’ annual global letter writing marathon this year, by signing a greetings card in support of a human rights lawyer, Dr Mohammed al-Roken, who is serving a 10-year prison sentence in the UAE. Dr al-Roken was convicted in July 2013 in a mass trial of government critics and reform activists following years of harassment because of his work for human rights. Amnesty International believes that the trial was politically motivated and grossly unfair and that the defendants were denied the right to appeal the court’s verdict and consider him a prisoner of conscience.
Mr Zahawi is himself a member of Amnesty International and is pictured signing the card alongside Stratford’s long time campaigner, Eileen Alberti. Every December, Amnesty supporters write millions of messages to change lives worldwide in an effort to release prisoners of conscience, bring torturers to justice and change laws to protect people's freedom.