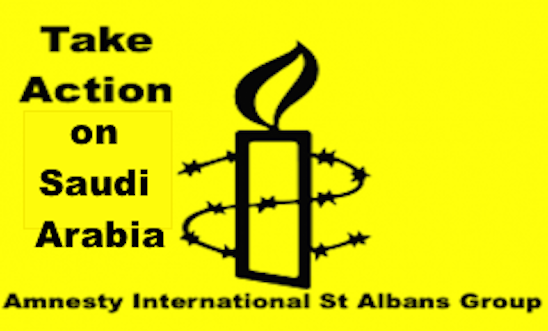 In Saudi Arabia the supperission of human rights does not surprise. In fact the Saudi regime has established a terrorism law, which came into effect on 1st February 2014, that uses a vague definition of terrorism.

In the first 6 months alone of 2015 Saudi Arabia has executed 102 people. The concern is that the death penalty is often used after very unfair trials and using evidence which has been gained through torture.

Amnesty International UK's position is that:

To read more on this subject follow the following links;

Take Action and support the rights for;

Waleed Abu al-Khair, a lawyer who defended the rights of many Saudis, and who received a 15 years sentence for setting up a human rights organisation and as a punishment for his human rights activities.

Raif Badawi, he was given 50 lashes in public in January and has 950 lashes and nearly 10 years in prison left to serve and that is mainly for blogging which 'violates Islamic values and propagates liberal thought.

Ashraf Fayadh a 35-year-old Palestinian poet who is sentenced to be executed by the Saudi Arabian authorities for apostasy.