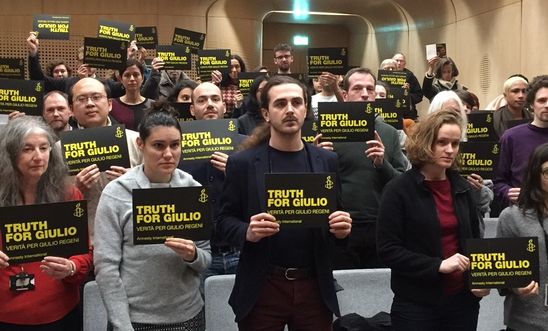 This photo was taken following a screening of the documentary film 9 Days in Cairo at St Anthony’s College in Oxford on 24th January.

The film is a about the torture and killing in January-February 2016 of the Italian student Giulio Regeni, who was working on a PhD at Cambridge University, involving field work in Egypt, at the time he lost his life. The film was produced and directed by two journalists of La Repubblica. They want the film to be screened around the UK as part of their campaign to persuade the Egyptian government to investigate Giulio Regeni's torture and death, and to bring the perpetrators to justice. Amnesty International UK launched a campaign for “Truth for Guilio Regeni” a year ago (see the link below), which is ongoing.