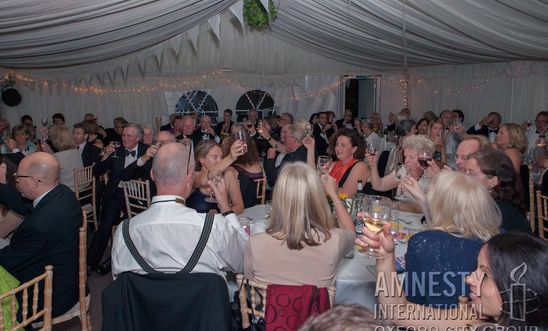 Over 100 guests spent this late summer evening enjoying the Cherwell Boathouse's spectacular food and wine. The compere for the night was BBC Radio Oxford's Bill Heine, and the group was honoured to welcome Hannah Perry, Vice-Chair of the Board of Amnesty International UK, and world-renowned human rights laywer, Baroness Helena Kennedy QC to speak after dinner.

Music for the night was provided by award-winning classical guitarist, Manus Noble and local band, the IMMposters.

This event raised over £3,700 for Amnesty International. The group would like to thank everyone who attended, helped organise this event or donated a raffle prize.

There is an album of photos from the night on the group's Facebook page.