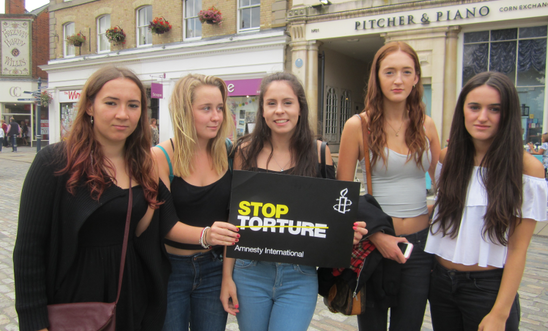 This year we didn't have quite enough people to have lots and lots of street collectors out in Hitchin Town, but the stall was very successful.

Thank you to everyone who helped with our stall and street collection in Hitchin on Saturday 15 August 2015, especially Kathie who was there from beginning to end, and Veronica who organised us this year. In all we raised £160.36 for Amnesty, collected 32 signed cards on behalf of victims of torture, and took 29 photos of 39 people with the 'Stop Torture' placard. We also had some people who left their details wanting to know more about the group so, all in all, it was a successful day.

Link to the online gallery of photos: