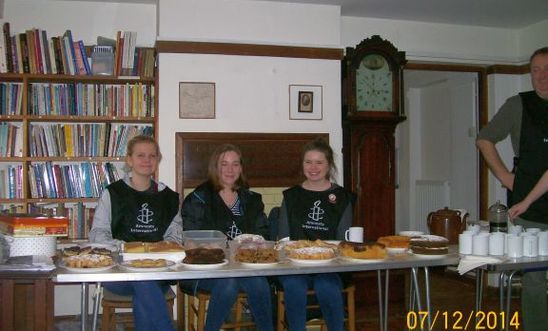 As last year we combined an AmnesTea with a Write for Rights event. Some members of St. Christopher School's Human Rights Committee and the North Hertfordshire Amnesty International Group organised us on Sunday, 7 December 2014. Veronica took 60 cards to the post office, with cards for solidarity fairly evenly distributed between the different cases. Of the £152 raised £38.13 were used for postage, and £114 will be sent to Amnesty International UK in due course.

This year there were fewer people who attended, but it seems that there were more members of the local group who could make it. There were definitely many more, yummy cakes left over at the end than last year.

For some more photos of the event (in very small resolutions), please go to