A Quick Guide to the Human Rights Act 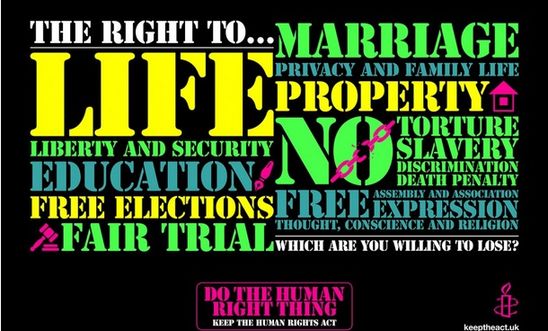 The new government’s pledge to scrap the Human Rights Act has been making news during and since the general election.  But what’s all the fuss about?  Here’s our quick guide to what the Human Rights Act is (and isn’t), why it matters, and what you can do to make a difference.

The Government is planning to repeal the Human Rights Act 1998 and replace it with a British Bill of Rights and Responsibilities.  This proposal has even raised opposition from members of the commission set up by the Government to look at the future of human rights in the UK.

Tell me more about the Human Rights Act.

The Human Rights Act was passed in 1998 and brought home to the UK the simple and universal rights to which we are all entitled as human beings. The British Institute of Human Rights has produced a short summary of the 16 basic rights contained in the Act.

The Human Rights Act works silently to ensure our rights are respected and allows us to challenge authorities if they violate these rights.  It also compels the government to explain how new laws are compatible with human rights, while courts must try to interpret existing laws with respect to these rights.

What’s so good about it?

The Human Rights Act protects us all, not just criminals and terrorists. Find out eight ways it’s made the UK a better place. And here are 5 more compelling reasons to keep the Act. Read the challenge against 14 human rights myths. Finally, The Independent and Liberty have teamed up to make a video which sums up some of the arguments.

There are already some senior Conservatives, backbenchers, and many in opposition who are speaking out against plans to scrap the Human Rights Act. But time is of the essence as the Government aims to outline its full intentions in the Queen’s Speech on 27 May.

Add your voice to Amnesty’s online petition calling on Justice Secretary Michael Gove to save the Human Rights Act.

Following the Queen’s speech, MPs will debate and discuss the items proposed in Parliament.  Write to your MP asking him/her to stand up for the Human Rights Act at this debate in Parliament. If your MP is holding a surgery, arrange to attend and speak to them in person, outlining some key messages.

Join Amnesty or become a member of one of our many local adult, student or youth groups around the country as we campaign in the next few weeks and beyond.

Now that you’re equipped with the knowledge to bust the myths around the Human Rights Act, spread the word on Twitter and Facebook.

If you’ve still got questions or want more information, Amnesty’s FAQs on the Human Rights Act is the place to go.