International Day of the Disappeared 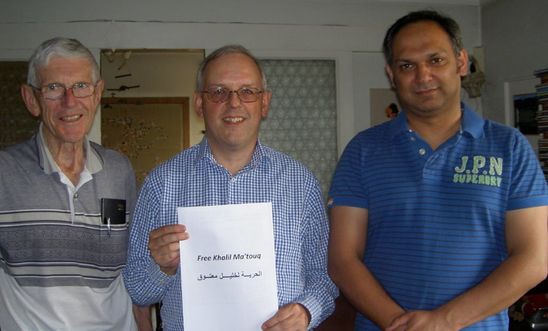 On the 2nd October 2012, Syrian human rights lawyer Khalil Ma'touq set off on a drive to work. He never arrived and his family have not seen him since.

Khalil Ma'touq's home is in Sahnaya, a suburb roughly 20km south of the centre of Damascus. His normal route to his office in the city takes him through a number of government-controlled checkpoints. Given Khalil's work as a human rights layer, there were immdeiate concerns that he had been arrested by government forces.

Khalil Ma'touq's family and lawyer have received various unconfirmed reports that Khalil was being held at a number of different branches of the security forces. The Syriain government have not reponded to the family's requests for information on the whereabouts of Khalil Ma'touq. Following an official inquiry a grouip of lawyers the government denied that they are holding Khalil Ma'touq.

If you wish to add to the montage, please download the message take your photo and send to activism@amnesty.org.uk by 20th August.