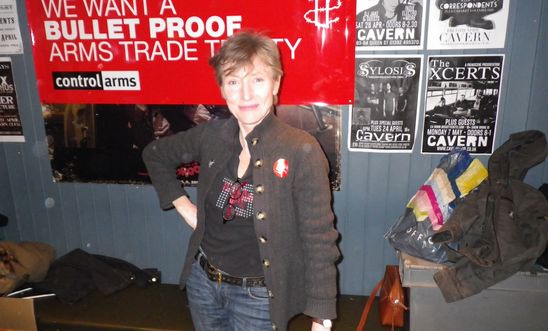 Anne at the gig

The Exeter local group jumped at the chance to reach a younger audience at the Cavern Club in central Exeter on Tuesday, 10 April. A throng of over 200 punk and rock enthusiasts filled the venue to listen to five different performances, headlined by the energetic and increasingly popular band Crazy Arm, whose strong anti-war ethos fitted perfectly with Amnesty’s Arms Trade Treaty campaign. Just about everyone ended up with an "I Want a Bullet-Proof Arms Trade Treaty" sticker somewhere about their person. Our thanks to Dean McMullen of "Muncie Girls" for organising everything, and for offering to do a repeat gig for Amnesty in the autumn. We raised just over £400.