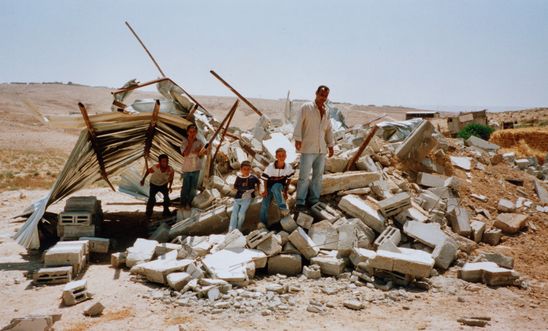 Palestinian houses in the West Bank are being destroyed. Inhabitants are being evicted and often forced to pay a fine for the demolition of their own house. They have very little time to gather their belongings, and often nowhere to go. They also have no land rights. Many houses without permits have been demolished by authorities inside Israel, especially in Bedouin villages which are officially designated as “unrecognized”. Permits are rarely agreed for Palestinians to build. The government has been known to subsequently approve the building of Jewish communities on exactly the same piece of land. Furthermore, there have been reports of Israelis living in illegal settlements in the occupied West Bank attacking and intimidating Palestinian civilians, sometimes in the presence of police, who turn a blind eye (Amnesty International Report 2015/16; available at: https://www.amnesty.org/en/documents/pol10/2552/2016/en/).

In the West Bank, Israeli authorities continue to support the building of illegal Israeli settlements and to demolish established Palestinian homes, especially in Bedouin villages. Palestinians’ freedom of movement is often restricted, and they are being forcibly evicted from their homes. This has only worsened since October 2016, with an escalation of violence and violent attacks instigated by both sides. 130 Palestinians were killed by Israeli forces between October and December 2016 (Amnesty International Report, 2015/16; available at: https://www.amnesty.org/en/documents/pol10/2552/2016/en/).

In December 2016, a landmark resolution was adopted by the UN Security Council calling on Israel to stop all settlement activities in the Occupied Palestinian Territories (OPT). This was a breakthrough recognising the illegality of Israeli settlements. However, since the start of the year, and coinciding with the first few months of Donald Trump’s US presidency, a “flurry of settlement activity” has been observed (https://www.amnesty.org/en/latest/news/2017/02/israel-opt-flurry-of-settlement-activity-shows-flagrant-disregard-for-international-law/). With regular announcements of new settlement construction, the Israeli authorities are disregarding international law and continuing these illegal activities unabated.

To highlight the injustice of the Palestinian and Bedouin house demolitions we’re asking all to put on Facebook or Twitter a picture of the household item that you would most fear leaving behind if you had only 5 minutes before the bulldozer crashed in.

If I had 5 mins before Israeli bulldozers crashed into my house, I would most fear leaving behind my [item]. #Palestinianhousedemolitions https://www.amnesty.org.uk/groups/cambridge/israel-and-occupied-palestinian-territories-house-demolitions

Please tag us in the picture (@amnestycambridg)

If you would still like to take part in this campaign but are neither on Facebook or Twitter, then you can send us a picture of your household item, with a description of why you would really miss it. Please send these to amnestycambridgecity@gmail.com.

We are aiming to make a collage with all the pictures, from Facebook, Twitter and those sent to us, and display these in venues in Cambridge (tbc). Please note that if you sent us your pictures and description, either by email, Twitter or Facebook, you give us permission to use it in these exhibitions, unless you specifically tell us not to. If you wish us to use your picture & description, but not your name, please let us know.

The action will be launched in Market Square in front of the Guildhall at our stall on Saturday 8th April, 10am till 1.30pm. It would be great if you could join us, either just drop by, or let us know if you can do a slot at the stall.

Please follow us on Twitter: @amnestycambridg where we will retweet actions taken by Amnesty supporters and members of the public.