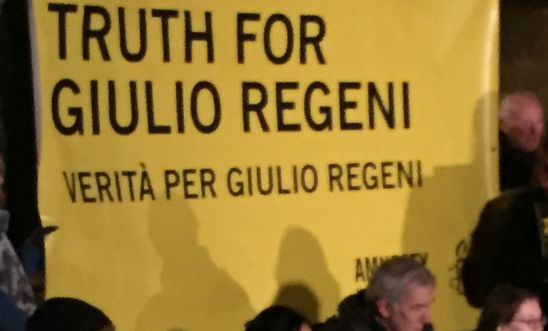 It is now nearly four years since Cambridge PhD student, Giulio Regeni, doing field research in Egypt, disappeared off the streets of Cairo in January 2016.  His body was found, very badly tortured, nine days later. The Egyptian Government has never provided an adequate response to how Giulio was abducted, tortured and killed.  Others are still suffering a similar fate. Amnesty continues to demand Truth for Giulio.

In Egypt today, people who demonstrate peacefully, or use social media or legitimate political activities to criticise the government, get caught up in the repression which the state uses for counter-terrorism.  Hundreds of people are detained arbitrarily, tortured, undergo unfair trials and unsound convictions simply for expressing their opinions. Debora Singer will be presenting Amnesty International’s recently published report exposing the systematic nature of this repression and provide an opportunity to discuss ways in which Amnesty activists can seek to end these practices and bring the perpetrators to justice.