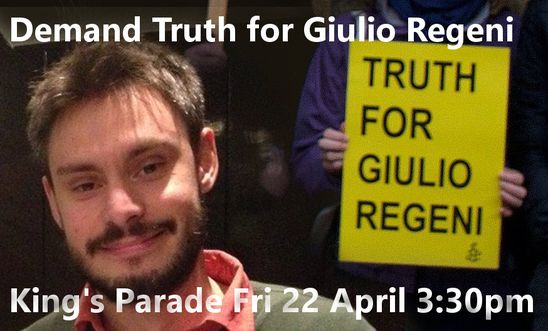 Organised by CUAI and Amnesty International Cambridge City Group, supported by Egypt Solidarity Initiative. We will be joined by friends of Giulio and Daniel Zeichner MP.

The Egyptian government denies it had anything to do with his disappearance and murder. Yet what happened to Giulio was not an isolated incident: over 400 unresolved cases of forced disappearance have been documented in Egypt since August 2015. Amnesty International reported nearly 90 cases of torture in the first three months of 2016.

Giulio’s family, friends and colleagues are demanding to know the truth about what happened to him as the first step towards winning justice for all Egypt’s Disappeared.