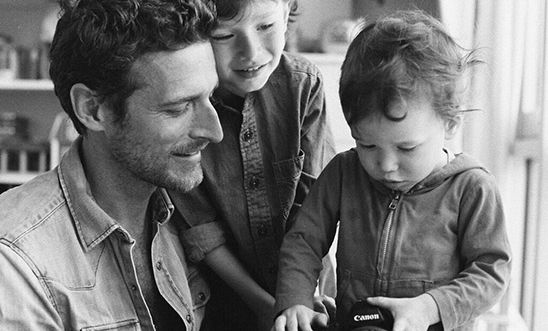 Alexi Lubomirski may have photographed the likes of Beyonce, Taylor Swift, Nicole Kidman, Oprah Winfrey and Jennifer Lopez over the course of his career, but the majority of us will be most familiar with the stunning royal wedding shots of Prince Harry and Meghan Markle he captured earlier this year.

“They were such an easy couple to shoot - so obviously in love,” Alexi, 43, remembers.

Outside of work, Alexi says that his favourite subjects to snap are his wife, Giada, and his two young sons Sole Luca, eight, and Leone, five.

“Photographs of my family are incredibly important to me - they’re littered across my house and instantly connect me to a moment of happiness,” says Alexi. “Many people would choose their phone if they had to save one thing if their home was burning down, but I think I’d struggle not to take photos.”

Which is why Amnesty’s latest project to create the UK’s biggest family photo album to support its #FamiliesTogether campaign has chimed with Alexi so much.

The campaign wants restrictive  UK  rules to be eased, helping  refugees  who  have  lost  their  homes  and  been  separated  from  their  families  be  reunited.  The  photo album will  be  a  celebration  of  family  life  today  in  all  its  glory and will  be  presented  to  the  Home  Secretary  as  a  call  to  help  the  mothers,  fathers,  brothers  and  sisters  who  have  been  torn  apart  –  giving  them  a  chance  to  rebuild  their  lives  and  look  forward  to  safe,  happy  futures  together.  Earlier  this  year  MPs  voted  overwhelmingly  in  favour  of  changing  the  rules  keeping  refugee  families  apart.  Sajid  Javid  has  the  power  to  change  these  rules  with  the  stroke  of  a  pen.

“I can’t begin to imagine what it must feel like to be a refugee who has fled their entire life as they know it and arrived somewhere many hundreds of miles away, with no way to be reunited with their family,’ he says. ‘That one treasured family photo they might have carried along the way could be the only comfort they have. It is heartbreaking and I want to help change this.”

Alexi has shared his own precious photo for the album - a candid shot that his assistant took in his studio.

“I love this picture because it shows my two passions - family and photography. I was showing the kids my new camera and how it works - the photo is a simple one, just us playing together. My dream is that my boys become my assistants when they get a bit older. You get to travel a lot in my line of work, but quite often you don’t have the closest people in your life to share it with.”

To help with Amnesty’s campaign, Alexi has offered up five top tips to help you take the perfect family photo for Amnesty’s album - and thankfully, none of them involve any expensive bits of kit….

It’s easier said than done, but try not to force family pictures: “When you’re taking a family photo it can be easy to lose sight of why you’re taking it - for memories. Have fun, try not to worry about the kids wreaking havoc or pulling faces. You’ll probably look back and love that picture all the more for any ‘flaws’ you find.”

Alexi says more is definitely more when taking family photos: “If you’re taking pictures of a moment, just keep pressing that button. Take 50 and review them later - there will probably be a gem in there - maybe someone hysterically laughing or maybe a really natural, happy smile.”

Make people stay too still when taking a photo and you’ll be setting yourself up for a bad result: “I’ll often try to get my kids to run towards the camera and I’ll walk backwards taking the photo . With children it makes them laugh and with adults it takes their mind off the photo being taken. It  switches one side of the brain off and immediately helps a camera-shy person feel less awkward.”

… AND TALK THE TALK

“When I’m taking photos I don’t shut up - there’s nothing worse than waiting for your photo be taken while a photographer stands there silently. You need to encourage people and sometimes direct them. Praise them if the pictures looking great. This will boost their confidence and also make sure you frame the perfect shot. ”

LEARN TO USE LIGHTING

While family photos aren’t about looking your best, it’s worth remembering you’re almost guaranteed an unflattering shot if you take a photo outside in the middle of the day. “If the light’s directly above you, you’ll look awful - no matter if you’re a model or not,” he explains. “Pictures will generally look better in the late afternoon as the light is lower. And if you can take a shot under a tree, even better - here you get open shade light which is beautiful, soft and bounces nicely off people’s faces. You also get some interesting background environment in there too.’

●    To submit to a photo to the UK’s Biggest Family Photo Album and be in with a chance of winning one of 13 Virgin Experience Days’ Family Segway Rally Days out as well as oneTiki Lodge Family Adventure Week in Wales worth £950, upload a photo to www.amnesty.org.uk/uk-biggest-family-photo-album.

●    #FamiliesTogether  is  a  coalition  of  over  20  organisations  working  to  secure  refugee  family  reunion  in  the  UK  including  Amnesty  International  UK,  British  Red  Cross,  Oxfam,  Refugee  Council  and  UNHCR.  Visit amnesty.org.uk/familiestogether  for  more  details.    This  campaign  is  supported  by  the  players  of  People’s  Postcode  Lottery.