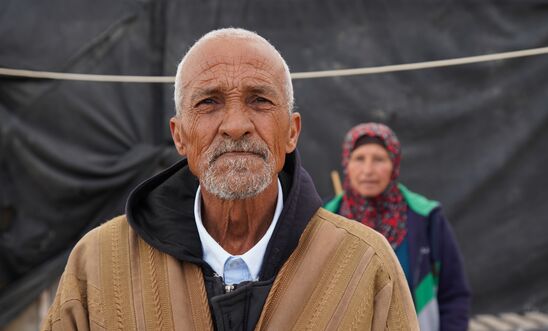 A Palestinian man and his wife in the village of Susiya, in the occupied West Bank in February 2020. Years ago the family was displaced to make way for a new illegal Israeli settlement © Fadi Abou Akleh

Once again, the Israeli authorities are demonstrating their complete disregard for international law. The UK government has condemned Israel's plans to illegally annex parts of the occupied West Bank, but it needs to urgently match fine words with effective actions: at a minimum, it should ban Israeli settlement goods from UK markets and prevent UK companies from operating in the settlements.

As of the 1st of July, the Israeli government can start to illegally annex parts of the occupied Palestinian territories (oPt). In April this year, Israeli PM Netanyahu and his main rival Benny Gantz agreed on a unity government deal which allows Israel to formally annex all Israeli settlements in the West Bank as well as the Jordan Valley. This is in line with what was announced in Trump’s  dismal “Deal of the Century” released earlier this year. Annexation means that those areas that are recognised as occupied according to international law will be formally brought under Israel’s sovereignty. International law is very clear on the issue: annexation is unlawful. In the past few months many in the international community have said that annexation would not go unanswered, but most, including the UK, have failed to articulate how they will effectively oppose it. This lack of effective action over the years has led to where we are today: emboldened by the US, Israel knows that there are still no meaningful consequences to its actions. The UK needs to prove them wrong and stand up for human rights.

We know from history that international law and public statements of condemnation are not enough to dissuade the Israeli government.  In 1967, Israel de-facto annexed East Jerusalem after the six-day war, before making the annexation official  in 1980.  Israel also annexed Syria’s Golan Heights in 1981. Since 1967, Israel has built hundreds of illegal settlements across the occupied West Bank (including in East Jerusalem). Today more than 620,000 Israeli settlers live in the occupied Palestinian territories in gated cities connected by settlers-only roads. During a one-week mission to Israel and the oPt in February 2020, a delegation of Amnesty UK staff were able to witness first hand the way settlements infringe on Palestinian human rights. We spoke to many Palestinians living close to illegal settlements, sometimes merely separated by barbed wire. They told us about the frequent attacks from settlers on their homes and cattle, the  harassment from Israeli authorities and the constant threat of house demolitions to make way for new settlement housing. Israel’s annexation of Palestinian territories means a continuation of settlement expansion into occupied land and an aggravation of the grave human rights violations already faced by Palestinians.

The international community is not powerless in the face of severe breaches of international law such as this one. EU member states responded quickly to Russia’s illegal annexation of Crimea and Savastopol in March 2014, using a wide range of measures such as restricting economic cooperation and implementing asset freezes and travel restrictions. The UK government was immediately very vocal about its commitment to apply tangible measures against Russia in response to annexation, and ultimately implemented them.

The comparison with how the UK government has handled Israel’s plans to annex the occupied West Bank is shocking. On the 30th of June, the government failed to explain in Parliament what concrete steps the UK would be taking following the illegal move. Challenged by Lisa Nandy MP, the Labour Party Shadow Foreign Secretary, who called on the UK government to ban settlement goods from UK markets, the Minister in charge of the Middle East dismissed this totally legitimate call to action as ‘partisan politics’ promoted by “voices on the left”. The call to ban settlement goods from UK markets is one that Amnesty has pushed for since 2017, not as a sanction against Israel for annexation, but as a response to settlement expansion anchored in the UK’s own international legal obligations not to recognise an unlawful situation.

The second key action we have been advocating for is for the government to prevent UK companies from operating in and trading with the settlements. Three UK firms have been named in the UN database of companies involved in settlement-related activities - JCB, Opodo and Greenkote - and as a first step the UK should ensure that they immediately end their business ties with settlements. Again, there is nothing radical about this demand: companies too have human rights responsibilities and the UK has on paper been a strong supporter of international human rights standards for businesses: once again, words are hollow until they are matched with actions.

These two measures are urgently needed to close the gap between the UK’s statements of condemnation and lack of action in the face of yet another  breach of international law by the Israeli authorities, to protect the international legal order and to prevent further violations of human rights against Palestinian communities in the oPt. A group of 47 UN human rights experts recently warned us of the bleak future awaiting both Palestinians and Israelis if Israel’s unlawful actions go unchallenged once again: “What would be left of the West Bank would be a Palestinian Bantustan, islands of disconnected land completely surrounded by Israel and with no territorial connection to the outside world.” It is up to the international community to put an end to impunity, ensure there is a cost to defying international law and protect the rights of the Palestinian people.

Our press release on annexation can be found here.