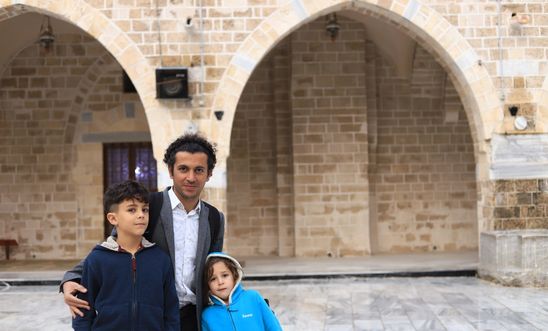 Ahmed and his children inside the Omari Mosque in Gaza, 2020 © Photo by Alaa Massoud

Palestinian writer and director Ahmed Masoud tells us about his recent visit to Gaza, where he is from, and how Palestinians living under Israeli occupation have been coping with the pandemic.

By now most people around the world are experiencing everyday being the same, counting the hours go by and waiting for an end to something they can hardly understand. Many have become accustomed to the look of their own homes and perhaps paid attention to things that they have never noticed before, the cracks on the wall, the mould in the bathroom, the different DIY jobs which they have put off for a long time. Quarantine has made some memorise how many trees there are on their street, what time the rubbish is collected and how many people pass by their house every day. Health concerns, travel anxieties, cabin fever, feeling locked down in one place and worrying about what would happen to the children if a parent gets sick. These are just some of the common experiences many of us have shared during the COVID-19 crisis.

In this globalised and interconnected world, it is strange to think of borders being closed and planes being grounded. The prospect of visiting another country now seems like a dream. And the anxiety of worrying what will happen if one of us gets sick, given the stresses on our national health service, feels like a nightmare

This is pretty much how people in Gaza have been living for at least 14 years - but the situation is far worse in that tiny blockaded and bombed out strip of land on the eastern coast of the Mediterrean Sea. I remember clearly when Palestinian passenger planes stopped flying after Israel destroyed the two year old airport in 2000. The airport had opened in 1998 as part of the Oslo agreement and was bulldozed when the Second Intifada started. I remember seeing images of Israeli tanks on TV destroying the runway. People in Gaza thought it was going to be days or maybe weeks before things got back to normal. But we are still waiting -  in fact the situation deteriorated further after Hamas won the elections in the strip in 2006 -  Israel imposed a full siege on the people of Gaza – collectively punishing children, women, and men - closing all border points and restricting food and life-saving medical supplies.

The “quarantine” that Palestinians have been living in Gaza is now in its 14th year. Their lives are totally controlled by Israel’s occupation forces: some Israeli officials boasted about how they even manage the calories that the 2 million people in Gaza need.

We Palestinians have been living under a harsh Israeli military occupation for 53 years now. But the loss of normal life goes as far back as  1948 when Palestine was wiped off the map and Israel was created. Since then, my family has been living in a crowded refugee camp in Gaza. I have been worried sick about them since I moved to London in 2002 because of the constant Israeli invasions and war and the current pandemic has now added to my fears. If coronavirus was to spread in Gaza, that would be devastating. As of May 7 , there are only 20 registered cases – but with the lack of medical supplies and hospital beds, medicine and ability to leave, the outcome would be beyond anyone can imagine.

Worryingly, there have been reports of Israel refusing to allow enough testing kits to be easily accessible by the medical establishments in Gaza - this is inhumane. Social distancing is impossible to implement in the crowded refugee camps of Gaza. Most households have at least six members of the same family, often from different generations, living together under the same roof. The majority of homes are not bigger than three rooms, which means that streets are often used as an extension to the house, with people socialising on their door steps and sometimes even preparing their food - something that I hugely miss here in London. The smell of coffee perfumed with cardamom, fresh bread sprinkled with Za’atar, hot chillies being pounded with garlic to prepare a delicious Gazan salad and Kunafeh sweets being prepared are what define a typical street in Gaza. As a Palestinian living in the UK I miss those smells dearly and I often think that without the Israeli occupaton, the strip would actually be a brilliant mediteranean tourist destination. Even the small alleys of Jabalia Camp could become a hotspot for foreigners who would also enjoy those smells and stop in a little cafe somewhere to smoke a shisha. But in the context of the coronavirus, those streets packed with people make it more difficult to implement social distancing to control the pandemic. And because of the Israeli occupation, such a dream of allowing Gaza to flourish into a buzzing mediteranean tourist city is impossible.

The worst thing about the siege or the lockdown, is that no one knows when it will end. You follow the news everyday to make sense of it, you go on a rollercoaster of hopefulness and desperation. Every day brings in a similar story but in a different format and you always think deep inside, is that ever going to be over? And as we all get used to it and things slowly start to feel normal, then someone you know dies and suddenly it brings it all back again, the unbearable reality comes crashing down on you. You start losing hope that things will ever change and as the popular Palestinian saying tells us: “life becomes too claustrophobic without the vastness of hope”. You sit at home and wait for things to get better but that may take a very long time and you will be a different person when you finally come out of it.

Everyone is now zooming/skyping/whatsapping their families, just like I have been doing in the years since I left Gaza. And everytime, I almost cried because of the injustice of not being able to see my family easily, of living a life on a small screen that hardly anyone understood.

A friend of mine was telling me about how she missed seeing her mother. She hadn’t seen her since the lockdown in London began on the 23rd March. It pained her not to be next to her family. I nodded and said that I understood how she felt and for the first time she seemed to understand how I have been feeling for those 18 years I have been away from my family. Last December 2019, I undertook the difficult journey from London to Gaza with my two young kids. I hadn’t seen my parents and grand-mother for 7 years, they hadn’t even met my six year old yet. It was time to risk everything – the three day taxi journey from Cairo to Gaza on a journey dotted by danger and military checkpoints, the siege on Gaza and the high possibility that I would be stuck there and lose my job, as well as the risk of my two young kids getting sick on the way. It had to be done, my father was ill and I wanted to see him and for my daughter to meet him. I am still traumatised by this journey and unable to describe the horrors of it - it makes me sick thinking of it and how people in Gaza are forced to live and survive. But maybe one day I will be able to write it down so I can show to the world what we, Palestinians, have to go through, whether there is a pandemic or not.

Ahmed Masoud is a writer and director who grew up in Palestine. His credits include the novel Vanished - The Mysterious Disappearance of Mustafa Ouda. Theatre credits include, Obliterated ,The Shroud Maker ,Camouflage ,Walaa, Loyalty ,Go to Gaza, Drink the Sea and Escape from Gaza. For more information, please visit www.ahmedmasoud.co.uk